Have you ever heard of Urushi? Also called Japanese or Chinese lacquer in English, the name indicates that the habitat of this lacquer is East Asia.

The first time that I came across this material was when I dealt with kintsugi. Kintsugi is a technique from Japan that makes it possible to repair broken ceramic objects aesthetically. When I graduated as a product designer, I wanted to try out this technique for one of my final projects, and so I ordered some urushi. Due to a lack of information, I did the kintsugi technique quite wrongly (you can see the final result of the design project HERE). In the meantime I have seen directly in Japan how kintsugi works properly, and my wish is to take a course in the near future.

During a visit to urushi dealer Sato Kiyomatsu Shoten Co. in Kyoto, I learned a lot about the all-rounder urushi. Traditionally, the paint is used for all sorts of everyday objects, as it prevents rust and mold, which is very useful in the humid Japanese climate. Nowadays, one mostly resorts to chemical materials. But first back to the beginning: Where does urushi come from?

Urushi is extracted from the resin of the East Asian lacquer tree (Urushi no Ki). This tree doesn’t like snow, but prefers cool summers and lots of water. Therefore, it is believed that it originally comes from Chinese mountains. It has also spread to other East Asian countries, and humans have certainly helped at this. The Japanese climate is actually not the best for the urushi tree, but it’s still possible to grow it here in plantations. Particularly well-known for the cultivation is the prefecture Iwate.
When a tree is 10-15 years old, it is scratched so that the resin runs out. You can win about 200g of resin per tree. Afterwards the tree is felled and a new is planted. Since the trees in a plantation are very narrow, it would be too narrow, as the trees get older and bigger. In one season (summer), a person in Japan can harvest about 80kg while in China it is 400kg. In China, the trees are not on fields, but on mountain slopes. While the workers climb the mountain early in the morning, they scratch the trees. On the way down they fill the resin.

After that the resin goes through several stages of processing: foreign matter, such as dust, is filtered out, ground and mixed with water at various percentages. Every different composition of the lacquer applies differently.
The consistency of urushi is influenced by UV light. Chemical compounds are split by the rays. The particles absorb light and dissolve. That’s why it is important to store Urushi protected from light.

In addition to the resin, the seeds of the lacquer tree are used as well. If you steam and squeeze them out, you can extract wax for candles.

The oldest find to detect the use of urushi is a 12,000-year-old urushi-coated dam, designed to reduce the flow of a river. A 9,000-year-old robe was found in a grave and should avert evil. Another find is a comb that was covered with urushi 6000 years ago.

Lacquerware was initially reserved for nobility in Japanese society, but was later used and valued also by wealthy merchants and citizens. Artisans refined everyday objects such as bowls, boxes or chopsticks, but also samurai armour with urushi. The lacquer artisans were controlled by the samurai and lived in their castles. However, since the samurai lords often did not have enough money to claim the lacquer art exclusively for themselves and to be able to pay properly, the artisans also sold their goods to merchants and moved out of the castles.

In the Azuchi Momoyama period (about end of 16th century) the first lacquer ware arrived in Europe. Because of the enthusiasm for this material, new works of art were created from a combination of Japanese and European art.

Urushi is a very expensive raw material, which is why even before the invention of synthetic resins people defaulted to cheaper materials such as petroleum or whale oil. But urushi has always been the highest quality lacquer: The urushi coating has an intense shine and an incomparable depth, it is resistant to heat, water, alcohol, solvents and acids, permanently elastic on fabrics and completely non-toxic after curing. Only long-lasting direct sunlight harms the lacquer.

For golden weaving or embroidery (such as for kimonos and obis), Mitsumata paper is coated with urushi and covered with gold leaf. The paper is then cut into thin strips and wrapped around a silk thread (see also Ironenkin). Nowadays there is also the “fake variant” of aluminium and polyester.

Urushi is still used for traditional fabric printing. Katagami are silkscreen-like stencils made of washi (Japanese paper) coated with urushi. A coarse weave is glued on the lacquer, which holds the individual pieces of paper together. The varnish not only serves as a connection between the washi and the fabric, but also makes the stencil water-resistant so that it can be used many times.

There are many different types of urushi with different colours and compositions. For each function you need a different lacquer. Japanese paint is rather liquid, while Chinese is rather thick and sticky. 98% of the urushi used in Japan are imported from China, Taiwan and Vietnam. Three years ago, the Japanese government decided that only Japanese lacquer may be used to restore ancient cultural treasures. The prefectures Iwate and Ibaraki, which are the main growing areas of the lacquer tree, had pleaded for it. However, in the past, imported lacquers were used for these works of art because they were better suited for them. With pure Japanese urushi restoration is very cumbersome.

For modern applications, one can also add pigments to the lacquer. Sato Kiyomatsu Shoten Co. has 100 different colours to choose from. For example jewerly can be painted with it.
The company also offers workshops on kintsugi, maki-e and lacquer coating. If you’re in Kyoto and want to know more about urushi, feel free to sign up on their website. 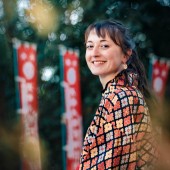 Aspiring social entrepreneur and sustainable designer on a mission to give back to the earth. Discovering mastership and aesthetics in Japan and beyond.

Collotype – Fusion of photography and printmaking